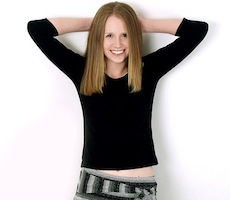 People sometimes ask me ‘Where do you get all the info about Jorja?’ I joke ‘I look it up!’ but the truth is, I’m also not afraid to ask total strangers “So hey, you were in this movie that Jorja was in. I run a Jorja site. Wanna chat?”

Alicia Dupuis, a model/actor who’s just now getting her name all over the place, was kind enough to reply to my email about working on 3 Weeks to Daytona. I only had a couple questions (and since two were ‘Nope’, I left them out), but Alicia was just so friendly I thought maybe you guys would like to see some color about the movie.

What was your role on 3 Weeks? I played a production assistant in the scene where Rob is shooting a commercial for his furniture company.

Was there anything you got to learn for the part? There were a lot of special effects in my scene, so I got to learn a lot about how all of that stuff works!

Did you get to drive any of the race cars? No, I did not. However, my father used to be a racecar driver so I grew up at the racetrack and with having racecars in our garage at home. I have pictures of myself when I was very little sitting in racecars.

What was the most fun about making the film? The most fun part of making
this film was how silly some of the stuff in my scene was. The character of Rob got to wear a huge Godzilla costume(He was Robzilla) and destroy this entire mini city that was set up. There were a lot of laughs involved!

You can find out more about her at her website aliciadupuis.com or on that insidious Twitter thing as @AliciaDupuis!