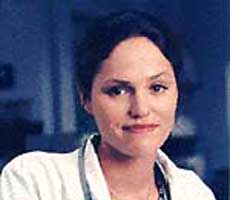 It’s new to YOU, isn’t it? Yeah, well, let’s just say that some digging through microfiche pays off.

From 1997, I’ve got an old issue of The Advocate, published just a few days after Maggie Doyle became only the 24th openly gay character on prime time:

ER gets a lesbian

Prime-time TV just got it’s 24th gay character. ER‘s Dr. Maggie Doyle, played by Jorja Fox, came out to fellow first-year resident, Dr. John Carter, played by Noah Wyle, on the February 6 episode of the hit NBC drama. To coproducer Dr. Neal Baer, who wrote the script, Maggie’s lesbian revelation is no big deal. “We also found out that she’s a vegetarian in that episode and that she collects guns,” Baer told The Buzz. “There are all kinds of stereotypes. I wanted to make sure this person doesn’t fit into any box.” Nor will Maggie lead with her lesbianism, says Baer. “We’re going to play her as a doctor who happens to be a lesbian. If it comes up, it comes up, just like in real life. Maybe someday there’ll be a patient who says ‘I don’t want her touching me.’ That would be an interesting story, because that happens.

Back in 2003, Jorja was a spokesperson for the annual Komen Los Angeles County Race for the Cure, and the Los Angeles Magazine had a short article on her work:

Remembering her own experiences as the loved one of a cancer victim, Fox is enthusiastic about what funds raised at the Race can accomplish. “The Komen Foundation has a tremendous amount of empathy, wisdom and guidance to offer people,” says Fox. “They’re an incredible resource.”