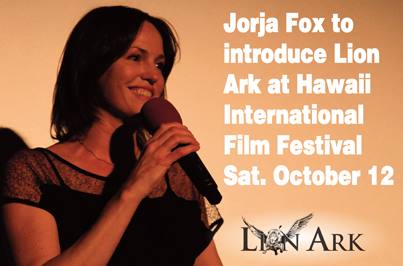 You are here: Home / Jorja Fox / Lions and Jorja and Hawaii

If you saw the post on FB, then you already know Jorja will be in Hawaii on October 12th for the Hawaiian International Film Festival (HIFF)

CSI actress Jorja Fox who appears in Lion Ark and an associate producer of the film will be coming to Hawaii to introduce the film and will also participate in the post screening Q&A on the Saturday, October 12th at 5pm screening.

Now I don’t advocate flying to Hawaii just to see her, Hawaiian Jorja Fans get on over to the right island for that!

Can’t make it? Check out the photos from this weekend’s presentation at Mill Valley.