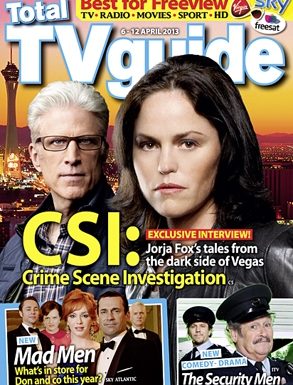 Who would have ever thought we’d see Jorja on the cover of a UK TV Guide magazine? Though why did they have to pic that picture which was way too photoshopped.

Ah well you can’t have it all.

Your big break came in ER in the mid-Nineties. What was it like landing the role of Dr Maggie Doyle?
For me, it was the first time that people were really going to see my work. So I was scared senseless. On the night I got the job, I honestly almost drove to Mexico, because I was so terrified. I nearly told them I didn’t want to do it. But it was very thrilling for me to work with people who were so talented. And a great honour.

They actually have two slightly different interviews, and the print one had this about GSR:

This week, the CSI team is spooked by a case that brings back memories of their murdered colleague, Warrick Brown. How does that store compare to the rest of this series?

This season is unique, because almost every episode impacts on one of the characters in a personal level. In an episode we shot recently, Sara’s ex-boyfriend comes to town, and she has to grapple with that. For her, there’s always a steady theme of love … or not! She’s married to someone she’s deeply in love with, but she doesn’t see him very much.

Of course, her husband is former colleague Gil Grissom. Were you showed when they ended up together?

Well, the bigger surprise for me was that I returned to the show! I came back in the eighth season, when Gil was leaving, to tell that storyline. I never imagined that I would be invited to return to the show, and of course, when I was asked, I couldn’t say no, because it’s been such an amazing ride. I knew that Gil and Sara were going to take off, but I didn’t know that Sara was ever going to come back.

You can read both of the articles on the JFO Wiki: