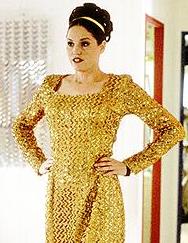 Loreli Daly (Jean Smart), beauty pageant organizer and Former Miss Texas Gal 1969, was run out of Paris, Texas ten years ago on the heels of a tabloid sex scandal. Living somewhere in Arizona with her long-term boyfriend and washed-up pageant MC, Lyle (Robert Wagner), and her daughter Corinne (Jennifer Elise Cox), holder of over 200 pageant titles and tiaras, Loreli is invited back, to Paris, to host the Miss Texas Tiara Quest – but she can’t face the shame. Corinne, who dreams of fleeing her stifling mother and the pageant world to pluck starlets’ eyebrows in Hollywood, sees the redemptive trip home as her means for escape.

Together with former childhood pageant-mates Liz Guild (Jorja Fox), currently a lovelorn prison guard, and Tiffany (Emily Procter), a bored but ambitious local news reporter who sees the story of Loreli’s return as her ticket to 20/20 or Dateline, the three gals convince Loreli to go home to Texas and confront her past. The four women and Lyle embark on a fateful road trip, during which they will comically and poignantly come to terms with their own limitations, buried truths and each other.

Guided by the book “Valley of the Dolls,” an addiction to the soft drink Tab, and having Lyle choke to death on a fake eyelash are just some of the things they encounter during their trip back to Texas, only to find that event is actually a drag queen beauty pageant… and so Loreli has the best drag queen pageant you will ever see!

Liz Guild is the loyal, but plain and ordinary, friend of Corrine’s. There’s never been any surprise or defiance or star power in Liz, but for some reason she can’t fathom and is grateful for, Corrine has always let her hang around.

Nothing at Liz’s job as a guard in the local women’s prison could ever hold a candle to the glamor and drama she’s privy to at the Daly house. She isn’t even glamorous enough herself to hold onto her boyfriend, Barry, who has left her and run off to Texas with all her clothes. So, when Corrine mentioned finding her mother’s invitation in the trash and her plan to use it as her own ticket out, and then Tiffany came on board with her plan to help Corrine by convincing Loreli to accept the invitation and use it as her ticket out, there was no question that Liz would be on board – even if she had to buy her own ticket just to go along with them for the ride. And she would find Barry.