Happy Hell Night is about the devil's henchman who escapes from an asylum and stops at a fraternity house he visited 25 years before. 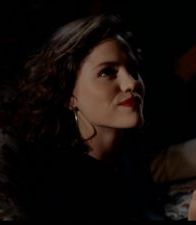 25 years ago at Winfield College, psycho-priest Zachary Malius murdered seven frat boys and was put away in the local asylum. Now, however, the same fraternity stages a prank from which Malius is inadvertently set free and returns to the house to repeat his crime…

As a prank for Rush Week, a couple of frat boys go to an insane asylum to take some pictures of an inmate there who supposedly killed a group of frat guys from their fathers’ generation at the same college. One of them, after removing a huge cross that’s barring the door, gets dragged into the cell and killed. They inadvertently have unleashed the Satan Preacher on their college campus once again to continue the bloody reign of terror that he began decades ago.

Jorja Fox plays a Kappa Sig Sorority Girl who doesn’t sleep with a frat boy. Sadly, she does get killed.