House of Frankenstein 1997 was a TV Movie putting a modern spin on the ancient horrors. 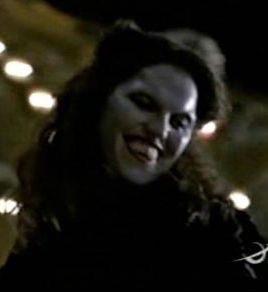 Distinctly mutilated bodies are being dropped all over Los Angeles like so much arcane propaganda. No one, however, knows how to read the message. The police are secretly baffled while the press has made the only stab at profiling the killer, calling the perpetrator The Midnight Raptor. Grace Dawkins is the Raptor’s latest victim, and the only one to have survived an attack, but she’s little help to the investigation. Grace insists she was attacked by some sort of wolf, and Detective Vernon Coyle, although he is intrigued by her beauty and animal magnetism, thinks she’s just terribly confused.

Jorja Fox plays Felicity, Grace’s roommate. The Raptor goes to the apartment searching for Grace, but finds Felicity instead, and bites her, turning her into a vampire.