Missing Persons was a television show about missing people, and the detectives who tried to track them down while putting their own lives back together. 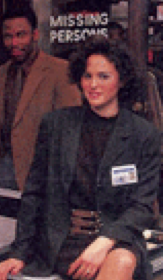 The show aired from August 1993 through February 1994 on ABC at 8 p.m., apart from the feature-length pilot episode, which was broadcast as the Monday Night Movie from 9 p.m.-11 p.m. ET.

Episodes usually began with some sort of humorous exchange between the team as they all crowded round the coffee machine, eating doughnuts. Ray would then come out from his office and hand out the cases for the day. Episode titles were all taken from a quote from their episode. The characters are all very familiar and jovial with each other.

Officer Constance (Connie) Karadzic is a twenty-something, friendly, emotional, caring, if a little sulky, member of the Missing Persons team. Her hard personal life has made her more passionate about her work, and she often puts in very long hours for fear of missing an important phone call or development if she were to go home. She rarely tells the rest of the team anything about her personal life, but is familiar with many details of their lives. Relatively new to field work, Connie often comes across as young and naive, but also uses her apparent innocence to cajole suspects and witnesses into talking to her.

Divorced, Connie still wears her wedding ring in order to avoid being hit on at work, and allows her co-workers to believe she’s still married. Connie’s ex was a cop in Wisconsin, but he had turned out to be a violent, alcoholic, bully. After leaving him, Connie became a cop in Chicago, retaining her maiden name. While her brother, Richard, supported her choice, Connie’s father claims that she should have made her marriage work, and this is the heart of a family dispute. In order to deceive her co-workers, Connie has a picture of her brother (as an usher) and her in her wedding dress on her desk.

Johnny Sandowski learns Connie’s divorced, but honors her request not to tell anyone, making him her slave. Connie also tells the Lieutenant later on, confiding in him her cancer scare as well. She works with the Lieutenant’s wife to plan a surprise party for his birthday.

By the end of the series, Connie is dating again and has a new boyfriend.