Velocity Trap is about a police officer trying to protect a federal banking ship from being robbed. 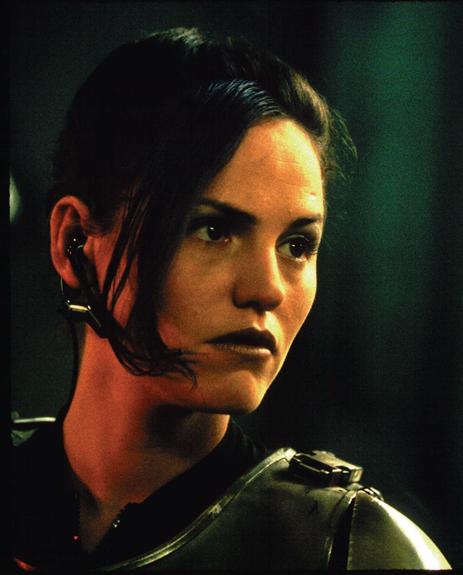 It’s high noon in deep space. It’s the year 2150, and electronic crime and interstellar piracy rule the galaxy. Facing unlawful murder charges, Police officer Raymond Stokes is reassigned to escort the Federal Banking Ship USF Atlantic and $40,000,000,000 through the Bermuda Triangle of space: The Velocity Run. With only Beth Sheffield, the ship’s navigator, to assist him, all his strength is put to the test when everything on board is threatened by an oncoming 600 million ton asteroid, and a well-armed team of thieves that have docked alongside the USF Atlantic. In a terrifying race against time, Stokes must fight to survive before the deadly impact.

Jorja Fox plays Pallas, Nick’s wife (the leader of the thieves). She is later killed in a shuttle crash while chasing down Stokes.

Pallas (possibly Alice Pallas) is a bad-ass merc with a machine gun. Her husband, Nick, is the mastermind behind the heist. A spear-carrier in the movie, Pallas’ role is mostly to do some grunt work. In the opening scene, she scares Fallout by setting their bomb off early, and nearly getting blown to kingdom come. And she loves every bit of it. Pallas is underutilized, but then again, all the bad-guys are, so go figure. All we get to find out about her is that her husband, Nick, expects her to pull dangerous and inane stunts, and they have a wonderful love-hate relationship. Nick doesn’t trust her, however, and she doesn’t trust him all that much. It comes as little surprise that when she dies, Nick isn’t sure if he should thank the killers or not.

Jorja Fox once commented in an interview that she took this role because she got to play with a machine gun.